I had found my way to Vinita, Oklahoma, to search for  more information about my father W. Lon Hutchison who had been committed in 1934 to the Eastern Oklahoma State Mental Hospital by his aunt. In search of family reconciliation, long after his death, I am writing a novel Tracking the Human: nobody’s a long time, about events in my father’s life. 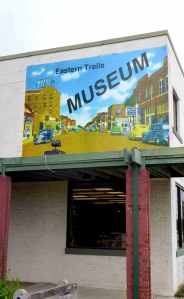 Next to the library was the Eastern Trails Museum. The Museum is made up of memorabilia, organized into sections, including kitchen, general store, post office, media, Civil War, ranching, Native Americans.

I have no idea why a museum in Oklahoma would be called “Eastern Trails”. Perhaps because it is located in Eastern Oklahoma?

Samples of exhibits at the Eastern Trails Museum:

and ranching gear, including collection  of barbed wire

There was no display of the Eastern Oklahoma State Mental Hospital, although it had been the largest employer in the county from the opening in 1913 until its closure in the late 1990’s. Perhaps not surprising. What community would want to publicize a state mental hospital?  Volunteers who run the Eastern Trails Museum said that they would like to help but could come up with nothing but a sketch of the buildings at the Eastern Oklahoma State Mental Hospital. 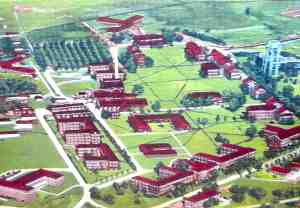 The people in Vinita were friendly, but it was mostly a cold trail. Onward.

Next stop? Tulsa Oklahoma, the second largest city in Oklahoma. I had contacted the Tulsa Public Library by email to ask for help from the research librarians.