Have you ever been to Lagos, Nigeria? Would you like to go?

If so, then get a copy of Welcome to Lagos. Reading this book rewards you with an engaging and complex experience, just like the city itself.

I visited Lagos many many years ago. I found the city  to be fascinating, frustrating and overwhelming.

Chibundu Onuzo, the author of Welcome to Lagos is a Lagosian currently resident in the UK. In a recent interview Chibundu noted, There are so many stories in Lagos. Leaving Nigeria made me appreciate what I left behind.

Lagos has an incredible pull on Nigerians throughout the country. It sends a powerful signal of a range of possibilities that draws people into its vortex of human energy, swirling round and round.

Welcome to Lagos starts in the Delta when two soldiers desert. They pick up other people, including a guerrilla fighter, a young girl, and a battered wife, forming their own informal family, brought together by misfortune and the magnetic pull of Lagos.

The five manage to make it to Lagos and stick together, despite internal and external challenges. They survive a series of adventures that brings the reader into the heart of the contradictions within Nigeria.

Enjoy your visit to Lagos! 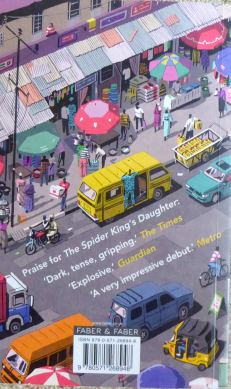 * The Economist Intelligence Unit report recently ranked Nigeria’s megacity of Lagos, with its 20 million population, as the second-worst city in the world to live in.

** Chibundo Onuzo, the author of Welcome to Lagos, disagrees, Who says the most liveable city is in the West? Culture doesn’t just live in museums.

• How do you define “culture”?

• Where do you find “culture”?

• What do you think makes a city “liveable”?

One thought on “Least Liveable City in the World?* **”