Welcome to family and fiction, my blog about the novel I’m writing about my father’s life, Tracking the Human: nobody’s a long time.

It began with a death. My mother. Death opens up old stories and new possibilities as well as family dissension and conflict. My mother died 1 March 2011, peacefully in her bed, on her sleeping porch, in her house in Kansas City, Missouri, USA.

I was with her. She opened her eyes, looked at me. I smiled and said I love you Mom, and she was gone. 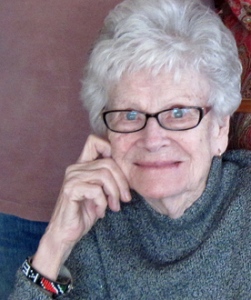 Notice the beaded bracelet she’s wearing that spells out KENYA.

After my mother’s death in Kansas City in 2011, I poked around in her attic to see what I could find. Her attic was a secret place, where people didn’t go – too hot in summer, too cold in winter, no insulation. The attic was only accessible through a pull-down ladder in the upstairs hall of her house.

Rummaging around in the attic, I found documents buried beneath keepsakes in a cedar chest. The documents I found started an off and on research project to learn more about my father’s life.

I had heard fleeting words from my mother that my father had been in prison for narcotics.

I went to the National Archives in Kansas City to see what I could find. At first nothing. BUT a document I found in my mother’s attic had listed aliases my father had used. Stephen Spence, an archivist tried to help me trace down my father through the aliases.

My father had been imprisoned at the Federal Penitentiary in Leavenworth Kansas, but there were no further records relating to his incarceration. Fort Leavenworth was divided into a military fort and a federal prison… establishing an annex which had to be used when there were thousands being picked up by the “war on drugs” in the 1930’s. Spence suggested he could have been in the Federal Penitentiary Annex and gave me contacts for further information.

I did start a blog in memory of my mother, BetteHutchisonSilver@ wordpress.com

Nothing more happened for a few years. I just couldn’t face it. I had other priorities at the time. Something made me change my mind. Find out in the next post.

Thanks for reading my blog.  Your comments are always welcome!