In search of information about my father W. Lon Hutchison and his family, for my novel, Tracking the Human, I went to the archives of the Tulsa Oklahoma Public Library.

Shocking discovery: my grandfather E.S. Hutchison was shot and killed by a jealous husband on 14 January 1925 in front of the Tulsa Oklahoma post office.

The Love Pirate story (my grandfather’s nickname assigned by the newspaper) continues three days later on the front page of the Tulsa Daily World on January 18, 1925.

Headline: South Sea Honeymoon New Life in New Land Denied to Mrs Purdy.   “She and Hutchison had planned to marry in St Louis and sail in a few days for South America to start life anew….A silver honeymoon upon blue southern seas. Eternal romance. In the fragrant balm of the tropics. Forgotten troubles. New friends of a new world. These were lost to Mrs. Helen Paul Purdy Tuesday night. In their stead the whisperings of a thousand gossips and the shouts of a thousand newsboys in a hundred cities came to mock her. ” 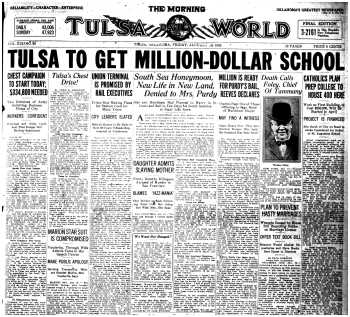 In the news story, according to Mrs. Purdy, she and my grandfather were planning to get married in two weeks and then relocate to somewhere in South America.

The events surrounding the shooting of my grandfather E. S. Hutchison in front of the post office in Tulsa, Oklahoma, would be almost unbelievable in a television soap opera.

The next blog will share more about the aftermath of his murder.

Your comments are most welcome!  Thanks for reading my blog.