After putting aside for several months my novel-in-process based on events in my father’s life, Tracking the Human: nobody’s a long time, I came back to it. I went through it page by page. Made some minor changes. Leanne my editor did a copy edit. Ready for layout.

So what am I waiting for? Is it perhaps that I’ve lost some of the energy and enthusiasm? Or is it that I can’t face actually publishing and sharing the book and what that entails? So just put it aside and pretend I’ve done it.

With the help of my spouse, Jim, we did the layout in InDesign and submitted it to Lulu in mid January. I ordered a proof copy. Now at the end of January it never arrived. So I ordered another copy for the final proof reading. 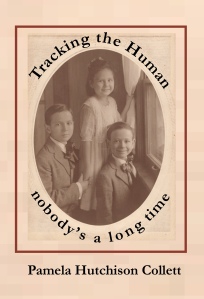 The photo is of my father W. Lon Hutchison on the left, his sister Margery and brother Jack.  Lon was the first born.  I believe this picture was taken in Tulsa, Oklahoma about 1917.

Please keep in touch if you would like to attend any of the book launches.  Thanks!

2 thoughts on “Let Down”