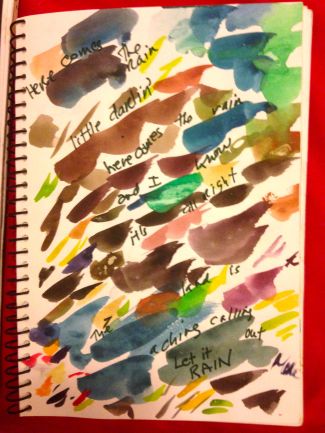 Found objects
at the camp site
A footy ball
A rusted hammer
Size twelve men’s black canvas shoes
A green and purple tennis ball
Sunglasses missing one lens
What else has been
left behind?

Were lives changed
enriched
enjoyed
from being here?
Who is to know?
Only trash
burned out campfires
left behind

Sadness comes and goes
Beauty of the trees
the creek
Sadness of the grey haze
Smoke of bushfires
cover the sky
devour the land
Where is the future? 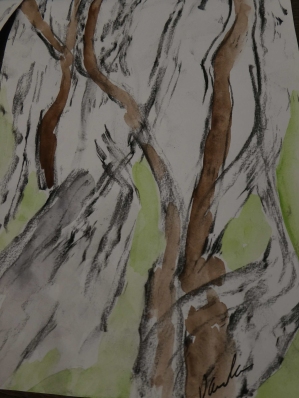 What is alive
in this forest
ants
cicadas
occasional birds

You didn’t know that Australia has a queen?

Well, the Queen of Australia is not Australian.

The Queen of Australia is…..

The Queen of England…

So if and when you become a naturalized citizen of Australia you are supposed to pledge allegiance to the Queen (of England). This is irksome, if you don’t believe in royalty and you do believe in social equality. Very irksome.

Australians have been trying to do something about this anomaly for some time now.

According to the book This Time by Benjamin T. Jones, “Republican voices have been heard since the early colonial days (in Australia) but they were never mainstream.” Jones documents the first Republican Campaign in Australia in 1850.

As an Australian citizen born in the USA, the fact that Australia still is NOT a republic and that the head of state is the Queen of England is almost unbelievable.   In terms of everyday life, it would seem that the Queen does not play that significant a role.

But look again, as Jones does in This Time, an easy-to-read, well-documented book about Australia’s Republican Past and Future. http://benjaminthomasjones.com/new-book-this-time-australias-republican-past-and-future/

Look again at the symbols that surround us in our everyday life in Australia.

The flag: the Union Jack is in the upper corner of the Australian flag. So what is Australian about this flag? We need a new flag. Ausflag is a non-profit organization working towards a new flag. Many beautiful and appropriate designs have been submitted to their website. Check it out at www.ausflag.com.au

Just two of many beautiful designs submitted to http://www.ausflag.com.au

Jones noted, “For many Australians, the relics of empire and monarchy are so ubiquitous that they become invisible. ” For those of us NOT born  in Australia of British background, it is quite noticeable. I already mentioned the flag, which is British rather than Australian. The coins all have the Queen of England on them, as does the five-dollar bill.

Three of the five states have British names: New South Wales, Victoria and Queensland. As noted by Jones, “Every major city, and indeed most regional towns, have a central business district marked with George, Edward, Victoria and Elizabeth streets, in honour of royals past and present”. Jones asks, “What constitutional model and national symbols best represent modern Australia?”

All Australians and people interested in Australia are encouraged to read this book and think about “What does it mean to be an Australian?”

Your comments are always most welcome.  Thank you.