My last post was about learning history through novels. Here’s my response to a novel by an Australian historian, Peter Cochrane.

I heard a review of The Making of Martin Sparrow, on ABC Radio National here in Australia. I put in a request online at the ACT (Australian Capital Territory) public library.

That’s how I came to having a copy of The Making of Martin Sparrow. I was already reading several other books so I put it on top of a pile. A few days later, I received a reminder from the library by email. The book was due in three days!

I read The Making of Martin Sparrow as an emotional journey. When the first page had a long list of characters, I was skeptical.  I skipped over that p 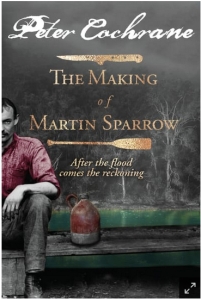 age and started reading. Tentatively. I kept on, although the main character, Martin Sparrow, was not particularly likeable.

At one point I thought the story was harshly boring and was ready to put it aside. The writing, the odd turn of phrase, the originality kept me going, even when the narrative seemed tedious.

My perseverance was rewarded. I entered into the world of settlers on the Hawkesbury River in southeastern Australia at the time of the flood of 1806. A world dominated by male violence, drinking, whoring – not topics that usually hold my interest. There was something more shining through… patches of sunlight in a forbidding, very dark sky.

My emotional journey through The Making of Martin Sparrow continues in the next blog.

Have you read this book

What are your reactions?