So very fortunate to be able to camp at Booderee National Park, Jervis Bay, South Coast of Australia https://parksaustralia.gov.au/booderee/ during the Christmas holidays. 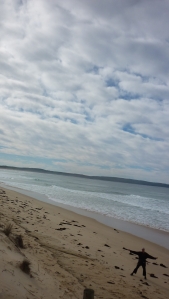 The campground is so beloved that those interested in camping during the holiday season (December-January) have to make a booking in August. THEN wait until September to find out if they have gotten a space.

Every day I went snorkeling (highlights included seeing a giant ray, wobbegong sharks, squid, and an octopus), hiking, and swimming in the crystal clear waters of Jervis Bay.

Reminder: December is summer in Australia

While camping, I  managed to read three books in five days 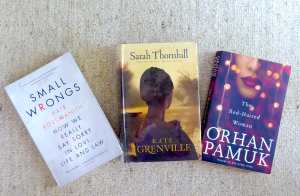 Small Wrongs was also about big wrongs…that is, major crimes, including murder. The book wrestled with the idea of remorse, what it is and when it happens. According to a New South Wales Judicial Commission official, “Remorse is very important for prisoners because, if they feel genuine remorse, they’re more likely to address their offending behavior and produce positive results during the various prison rehabilitation programs” ( p. 119). But what is “genuine” remorse? And who decides if it is genuine?

Sarah Thornhill is a novel about colonial Australia. The novel reveals how settlers’ massacre of Aboriginal Australians threatened the integrity of their own families despite cover-ups and lies.

The Red Haired Woman is an intriguing story of contradictions and similarities between mythical stories of Europe (Oedipus) and Iran (Shahnameh), both of which focus on violence between father and son. “There were in fact surprising parallels between Oedipus’s life and Sohrab’s. But there was one fundamental difference, too: Oedipus murdered his father while Sohrab was murdered by his father. One is a story of patricide, the other a story of filicide”. p. 141

Thanks to book reviews on Australian Broadcasting Corporation and the public library of the Australian Capital Territory for sharing these books with me.

One thought on “Reading while camping, snorkeling, hiking”